In the early 90's a young Nick Ali went to New York City to study with his trumpet playing idol Randy Brecker.  Now, years later, Randy will perform a set with Brownman's latin-jazz unit CRUZAO giving Toronto a taste of modern trumpet madness as it's never seen before.

LULA LOUNGE
1585 Dundas St. West (just west of Dufferin), Toronto, Ontario
416-588-0307
(MAP)
Doors Open @ 7:30pm
1st Set - Nick Ali & CRUZAO - 10:00pm
2nd Set - CRUZAO with Brecker - 11:30pm
Admission $10.00   Dinner Reservations @ 416.588.0307
InfoLine @ 416.538.7405
www.lula.ca
RANDY BRECKER - http://www.randybrecker.com           Randy Brecker has been shaping the sound of jazz, R&B and rock for more than two decades. His trumpet and flugelhorn performances have graced hundreds of albums by a wide range of artists from Blood, Sweat & Tears to Chaka Khan to Parliament-Funkadelics to Horace Silver to Jaco Pastorius and Frank Zappa.  He was the backbone of the Blood, Sweat & Tears horn section for years before leaving to play with Horace Silver.  It was just after this period he teamed with his brother - tenor saxman Michael - to form the Brecker Brothers.  This group would become a band of immeasurable influence and impact. Hailed by pop and jazz critics alike, their first album, which Randy produced, was nominated for four Grammys. The Brecker Brothers went on to record a total of six albums and garner seven Grammy nominations between 1975 and 1981.  In the fall of 1994, the Brecker Brothers released the double-Grammy winning "Out of the Loop" and in 1996 won Randy his first Grammy as a soloist in 1998 for "Best Contemporary Jazz Performance".   His new record "Hangin' in the City" is in stores now.  One of the most modern trumpet players in history.
Nick Ali & CRUZAO - http://www.brownman.com/cruzao           Nick Ali & CRUZAO - hard-hitting all original latin-jazz composed by Trinidadian born Jazz trumpet player Nick "The Brownman" Ali.  Amalgamating latin rhythms, jazz harmony and funk/urban ideologies in a chordless (no piano, no guitar) setting.  The first chordless latin-jazz group in history.  The group completed a dazzling 3 months of touring Canada's jazz festival circuit in the summer of 2002 in time to see the new release on Justin Time Records ("Shades Of Brown") hit number one on the college and community radio station jazz charts.  Called "the hottest item on the summer circuit" by the Globe & Mail they are a group that seethes with energy and pulses with improvisational spirit.  "2002 National Jazz Composer of the Year" was only one of many awards this young trumpet player has garnered of late:

Nick has recently returned from representing Canada at the 2002 Havana Jazz Festival in Cuba.
For more on his musical ventures please visit brownman.com 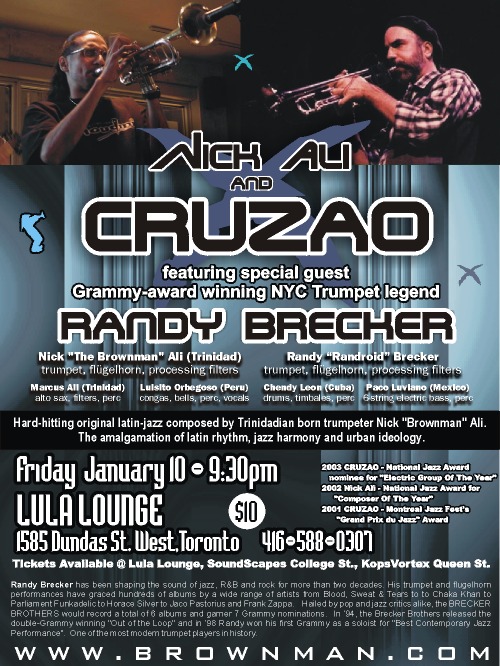