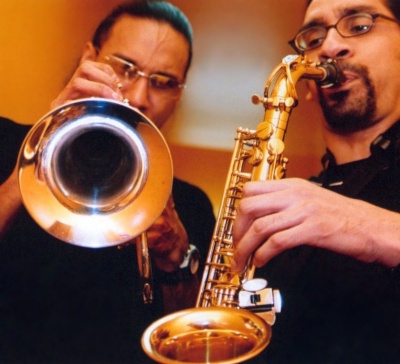 Mythology is something that jazz fans are more than familiar with.  Stories of unbelievable performances, unforgettable recording sessions and outrageous behaviour are whispered on the wind from one generation to the next, told around campfires by faithful followers with all the conviction and certainty of an eye witness for years to come. So familiar are we with this process, this ritual, we sometimes assume these myths exist only in the past. To witness one firsthand becomes unthinkable. Like the odds that the escaped convict with the hook for a hand will actually leap forth to terrorize us around the campfire, the possibility of witnessing a legendary performance in the flesh is something we assume will remain in the recesses of our imagination.
But for those of us lucky enough to be at Toronto's Lula Lounge on Friday, July 1, the imaginary became real. The Lula Lounge was ceremoniously burned to the ground, and standing triumphantly over the ashes, torching trumpet in hand, was Brownman Ali side by side his younger grinning alto playing sibling Marcus Ali.
The Ali Brothers quartet - one of his six bands that played eleven gigs during that week's Downtown Jazz Festival - turned in a sure-to-become legendary, two-and-a-half hour performance that held the boisterous crowd enthralled and even had them spilling onto the dance floor throughout the night.
This unusual turn of events ("Dancing? At a jazz gig!?") is less surprising when you take into account Ali's remarkable talent for blending jazz elements with funk grooves and reggae beats, and even more understandable considering the brilliant contributions of freestyle spoken word artists Enlight and Phatt Al, whose rapping ruminations and high energy performances added yet another layer of superlative artistry to the show.
When the audience wasn't enthralled by the eclectic yet cohesive mix of styles and influences - many Latin numbers saw Ali playing up a storm on percussion, while the laid back but intense encore featured Ali and brother Marcus, on alto sax, alternately dueling and complementing one another in a highly evocative, atmospheric and sonically adventurous duet - they were in awe of the musicianship on display.
Dane Wedderburn, who's beaming face projects perhaps the most jubilant stage presence in Toronto, spent the evening strangling his seven-string electric bass into submission in a sensational display of rhythm, timing and versatility, while drummer Kieran Adams was every bit his equal, laying the foundation for a dynamic, rock-solid bottom end with verve and style throughout the night. Meanwhile, Marcus Ali - whose intuitive duets with his older sibling evidence a connection that borders on the telepathic - at times threatened to steal the show with his sailing improvisational flourishes.
It seems more than appropriate that this monumental performance - a reminder of the sheer breadth and wealth of Toronto's jazz community - took place not only on Canada Day but also at the climax of the TD Canada Trust Downtown Jazz Festival. If you were unfortunate enough to miss it, don't worry - you'll be hearing about it around the campfire
for a year or two to come.

Andrew McIntosh is a freelance entertainment journalist based in Toronto and is currently an editor for the Toronto Film Festival Group.